In 2009, a new social platform entered the scene: Pinterest, a visual pinboard and social bookmarking site. I had used the Notes feature in Google Reader to collect links of personal interest (read: recipes and knitting projects) for quite some time. So when Google Reader discontinued support for Notes in 2011, I joined Pinterest and began pinning. So far, Pinterest gets high scores for a clean, simple and attractive user interface, for rising adoption rates, and for the ease of sharing. The main dings at this point are the platform’s lack of integration with other social sites (although they did recently enable Facebook integration capabilities) and the lack of tools for businesses and organizations. Because the site is still relatively new, this also means that they haven’t begun to offer advertising yet.

In my professional capacity as a community manager, Pinterest hasn’t entered my radar yet, and isn’t likely to do so. My organization was a great candidate for Google+ because many of the early adopters were people in the tech sector, which is one of our key audiences. Pinterest, however, is dominated by women, and most pins relate to lifestyle topics. Thus, not on my radar. 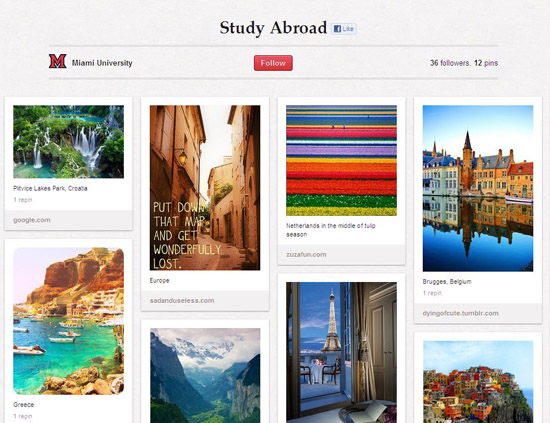 If you’re considering using Pinterest in a university setting, think about whether it’s a good match for your target audiences. Two schools that have done this fairly well are Texas A&M and Miami University. Though not perfect, their boards are branded well and address topics that are visually engaging and appropriate for student, alumni and donor audiences. I was particularly impressed with Miami’s study abroad board. In fact, the more I think about it, the more I’m inclined to say that a school that focuses heavily on study abroad programs (Butler University, for example) could focus on using Pinterest to promote international study opportunities. You could do one board for each program location and pin general travel information as well as individual students’ blog posts.

Is Pinterest on your radar? Are you likely to use it?